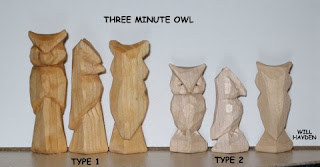 Here is the little owls that I do. The first year that I did them was 2005 when I had a problem(unknown at the time).. but I lost weight and no desire to do anything.. this lasted for 9 months with visits to my primary doctor every two to three weeks..and we would try something else for a couple of weeks..and on and on , until June of the following year. I did the JIM  RAHM style (type 1) and did around 1,400 . It was the only thing I carved during that time. 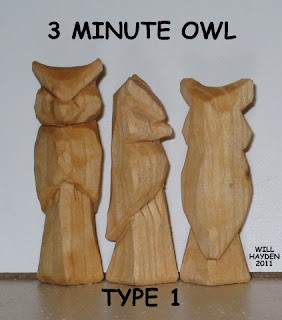 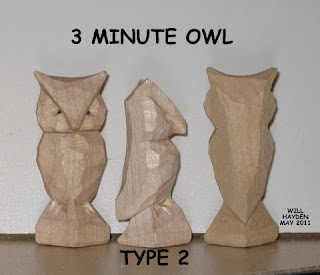 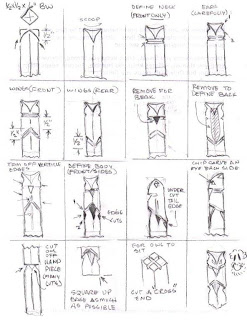 Jim only taught  eye to eye..and knife to wood...NO PATTERN.. years later a good friend of mine , John Lukens came up with this one and I used it in a class in Longview with the club as that were attending a LEWIS and CLARKE function in the park and wanted something to give to the kids
I used all scrap wood.. and cut to whatever size I could get out of it BUT nothing larger than 1/2 inch and  most of them smaller. IO never really use a pattern and only made a few pencil markings for the firs 25 or so.. since the wood was not always the same size it was faster just to  carve away with the knife.. Later I started to use a small V tool to do the claws and a small #11 to do the eyes.. as it was much quicker... ENJOY...

Over the years I have just carried them around in my pockets and given to almost everyone I encountered.. at the bank,store,doctors office, and car dealers .
Oh..the problem I had.. "it was from a blood thinner they had put me on."
so if you are on AGGRENOX and have a head problem(or headaches) STOP.
I called my doctor after talking to a friend.... and he said  "Stop for a week and then give me a call".. I skipped to pills and was up and running the next day..
Posted by WILL HAYDEN at 9:23 PM

WILL HAYDEN
Closed down my WEB site last May due to health problems..still have them and will until???whenever.